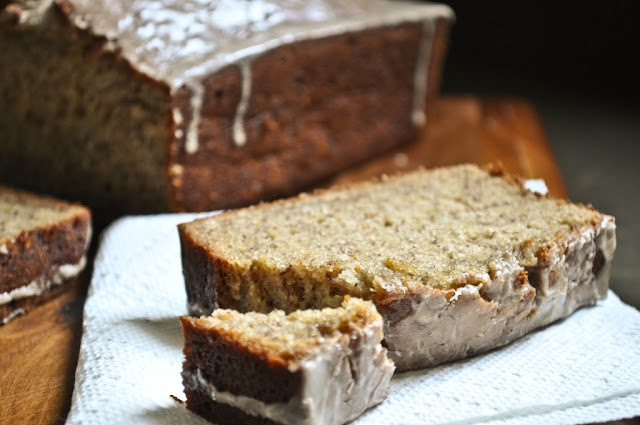 I almost gave up.  I've been getting Cooking Light magazine since the beginning of the year and I've had completely mediocre, non-blog-worthy, results with the three recipes I've tried to date.  Until now.  Recipe number four from the May issue turned it all around.  I guess I won't cancel my subscription just yet.

Chai banana bread was a big success, making the previous lack luster results all worth it.  At least that's what I'm telling myself.  I measure the success of a recipe by asking is it something I would make again?  It may need some tweaks or changes, but the base recipe is solid enough to warrant a repeat.  This recipe?  Already planning it.  No further tweaking necessary (you'll see below I already did the slightest bit of tweaking). 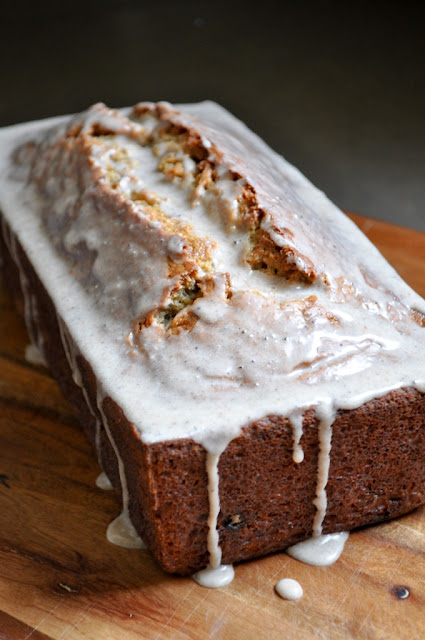 Wondering what "chai" is?  Chai, which is a reference to masala chai, means mixed spiced tea and originates in southeast Asia (around India).  The chai spice mixture, which can vary, typically consists of things like cardamom, ginger, cinnamon, cloves, peppercorn, star anise and allspice.  Chai tea has become popular all over the world, and you can sample the Americanized version at your local Starbucks or coffee house.  Just ask for a "Chai Tea Latte".  You'll get a slightly sweetened, steamed milk beverage infused with a concentration of black tea and spices.  It's actually my favorite hot coffee house beverage (no coffee for this girl).  It reminds me of spice cookies and gingerbread.  Which is probably why it works so well with banana bread.

In this recipe there is no tea involved, just the spices.  Cardamom, ginger, cinnamon and allspice are mixed together.  A portion goes into the banana bread batter and the remainder gets mixed with powdered sugar and a touch of vanilla to create a spiced glaze to finish the bread.  The spices are present, but not overwhelming. 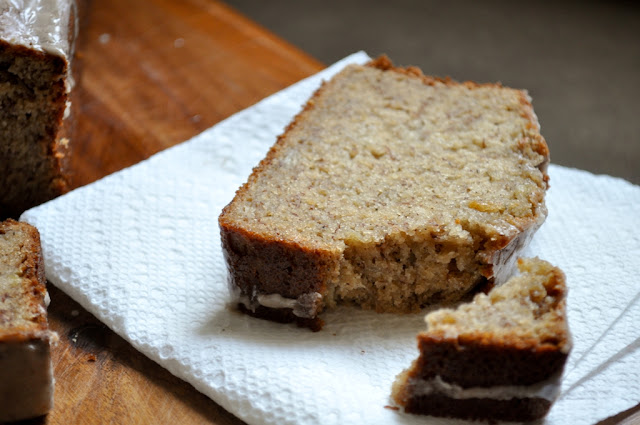 This lightened up version of banana bread doesn't lack in flavor or richness.  It can easily pass for it's full fat banana bread cousin.

I made one substitution in the recipe.  I didn't have plain yogurt on hand so I substituted fat free buttermilk.  I didn't actually have store bought buttermilk on hand either, so I made my own.  I added 1 teaspoon of white vinegar to 1/3 cup of fat free milk.  It worked perfectly!

Tip of the day - Make Your Own Buttermilk:

I always get so frustrated when I buy buttermilk at the store because I can never ever seem to use the whole container despite my best efforts.  Making your own is easy.

To make one cup of buttermilk - Add one tablespoon of white vinegar to a glass measuring cup and then fill up to the one cup line with milk.  Let it stand for 5 minutes and stir before using.

That's it.  No more wasted buttermilk!  You can use any type of milk you have on hand--fat free, low fat or whole milk.


Hubby and several of my co-workers sampled the bread and it was well received by all.  Hubs even went back for thirds!  This spiced twist on a classic may just become my new "go to" banana bread recipe.

Notes: the instructions below are how they are laid out in the magazine.  I did make a modification on preparing this by mixing my spice mixture and then adding the 1 1/2 teaspoons of it into the dry flour mixture (instead of mixing it into the batter at the end).  I just had a hard time stepping away from the traditional method of mixing wet and ingredients separately and then combining them together at the end.  I also mixed my vanilla in with the rest of the wet ingredients.  It would probably work out just fine either with either method.

You can use a stand mixer, hand mixer or just mix by hand the old fashioned way.  I used a stand mixer.  Combine bananas, yogurt, cooled melted butter and eggs until just blended.  Add sugars and mix until blended.

Combine flour, baking soda and salt in a bowl and whisk to combine.  Add the flour mixture to the banana mixture and beat until just blended.

In a small bowl combine the cardamom, cinnamon, ginger and allspice.  Stir 1 1/2 teaspoons of the spice mixture and 1 teaspoon of the vanilla extract into the batter until just combined.  Pour batter into the loaf pan and bake for 65 minutes, or until a toothpick inserted in the center comes out clean.  Cool in the pan set on a wire rack for 10 minutes.  Remove from pan and allow to cool completely.  To store, wrap the bread in foil and place in a zip top bag with the air removed.

Make the glaze by combining the powdered sugar, remaining spice mixture and milk until fully combined and spoon over the bread.
Posted by Gloria - The Ginger Snap Girl at 8:47 AM