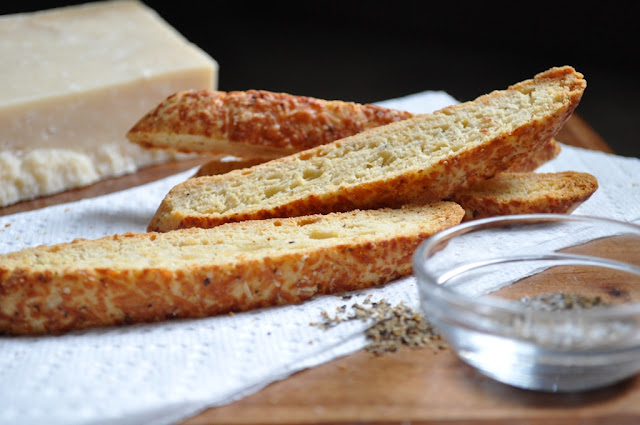 I missed my kitchen while we were away in Chicago last week.  And I'm already missing my kitchen this coming week knowing I will be in New Jersey for work Monday through Thursday.  I do enjoy eating out, but it can get old.  Since I knew that I would be home for just a few days before hitting the road again, I was anxious to jump into the kitchen and getting cooking.

One of the recipes I made was for Secret Recipe Club (to learn about SRC pop over to their website).  You may have noticed it's been awhile since you've seen a Secret Recipe Club post.  That's because the group went on hiatus during the month of January to undergo a few changes.  Nothing major, just some logistical fine tuning.  Amanda, the founder of SRC is always looking for ways to enhance the group.  If you're interested you can now follow SRC on Facebook, Twitter and Pinterest.  Though a little break was nice, I am glad we are back in business.

This month I was assigned Erin's blog, A Tale of One Foodies Culinary Adventures.  From the minute I started browsing her blog, I knew I would have a hard time choosing what recipe to make.  With a nice variety of sweet and savory recipes, everything was making me hungry.  Some of the front runners were chocolate tea cakes with earl grey icing, cranberry oat scones, lemon cheesecake mousse tart, gingerbread biscotti, roasted garlic and feta walnut dip, ultimate spaghetti and meatballs and Parmesan and black pepper biscotti.  They all looked delicious.  It's evident that Erin loves food and cooking and I'm thrilled to have a new blog to follow in my Google Reader.

It was a tough decision, but in the end I decided the Parmesan and black pepper biscotti would be "the one."  I wanted something Hubby would enjoy and as a bonus it would be the perfect accompaniment to a creamy mushroom soup I was also planning to make.  And I was intrigued by the idea of a savory biscotti.  Somehow I had never thought of biscotti being savory, but it's genius really!  Erin makes this recipe on a regular basis, so I was pretty confident it would be a hit here. 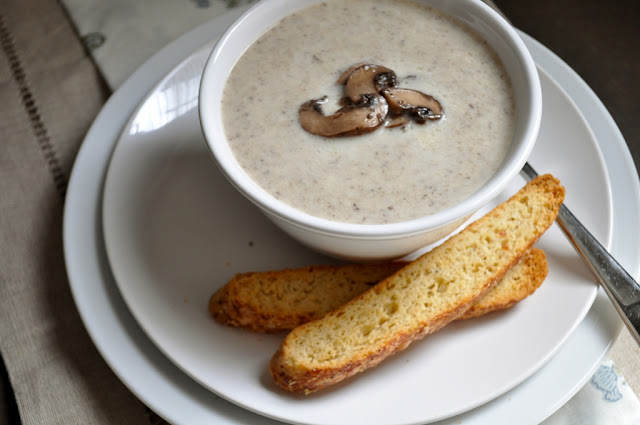 I wasn't disappointed.  The Parmesan and black pepper are both prominent flavors.  The biscotti have a firm crunch, but crumble nicely when you bite into them (no teeth breaking here!).  These savory biscuits pair well with soup (next time I'd like to make them to go alongside creamy tomato soup) or salad.  You could cut them into small chunks and use them as croutons on your favorite salad.  Or just eat them straight up.   This is good stuff!  Thanks to Erin for sharing this tasty recipe!  I'm already envisioning several repeat appearances at our house.

In a small whisk together eggs and milk.  Turn food processor on and stream egg and milk mixture into he bowl through the feeder tube until a sticky dough forms.  Divide dough in half and roll out each half on a lightly floured surface into a 10 inch log.  Place each log on the baking sheet and pat down to slightly flatten.  Brush each log with additional milk and sprinkle with Parmesan cheese and black pepper.  Bake for 30 minutes until golden and slightly firm.  Remove from oven and place the baking sheet on a cooling rack for about 10 minutes.

Transfer each log to a cutting and board and cut 1/2 inch slices at a 45 degree angle using a serrated knife.  Place slices back on the baking sheet 1/2 inch apart, cut side up.  Return to oven and cook for 10 minutes.  Flip biscotti, exposing the other cut side and cook for an additional 10 minutes.  Remove from oven and cool completely on a cooling rack.

Biscotti can be stored in an airtight container between layers of waxed paper for up to a week or frozen up to a month.

Posted by Gloria - The Ginger Snap Girl at 9:00 AM