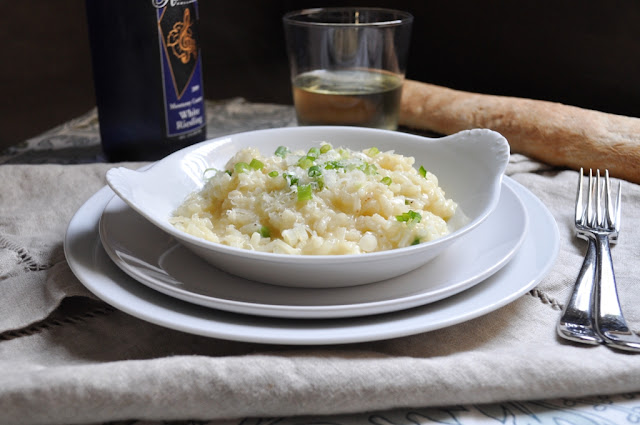 My risotto always turns out crunchy.  Every time.  Well all 5 or 6 times I've made it.  No matter how much broth I stir in or slowly I incorporate it, it comes out much more al dente than I prefer.  I think risotto is some kind of art that the right side of my brain has never been able to master.  Lucky for me the brilliant testers at Cook's Illustrated created a paint by numbers version.  Don't assume because it's "no-fuss," that it is any less fabulous than risotto made via the traditional method (I've had some excellent ones in restaurants).  This unique method of cooking the risotto covered in a dutch oven produces a creamy, velvety rice perfumed with wine and Parmesan cheese.  Ahhhhh!  And it's just right.  Not crunchy in the slightest (and also not mushy).

This is cause for serious celebration!  Okay, maybe not that serious.  But I was a little impressed with myself for making a risotto that I would be proud to serve to guests.  Finally!

Oh, see that bread in the background?  That's Hubby's handiwork on his quest to master the baguette.  :) Go Hubby!  This is one of his early works where he forgot to score the bread...but that didn't deter us from gobbling it all up.  He's gotten quite good at it and can whip out a baguette in no time these days.

To the folks at Cooks Illustrated: I'm fairly certain you guys and gals are cooking geniuses. 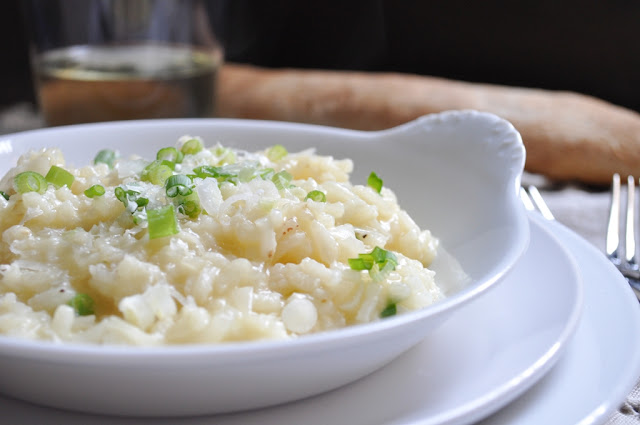 The only comment I have on the risotto, other than the heavenly heartwarming thoughts I have when thinking about it, is the teaspoon of lemon juice called for in the recipe was unnecessary in my opinion.  Hubby agreed as well...it's tasted too lemony.  If you want a lemony risotto, keep it in.  The recipe calls for a cup of white wine so there is already a fair amount of acid to balance the rich, creamy, Parmesan cheesy goodness.

Risotto is comfort food akin to a good homemade macaroni cheese.  The variations and flavor profiles are vast.  And I'll be trying several of them out now that I've been introduced to this no-fuss method.

Heat broth and water in a large saucepan on high until it reaches a boil, then reduce to a simmer.

In a dutch oven over medium heat,  melt two tablespoons of butter.  Add in onions and 3/4 teaspoon of salt and cook until the onion is soft about 5 to 7 minutes, stirring often.  Stir in garlic and cook until fragrant, about 30 seconds.  Stir in Arborio rice and cook, stirring frequently, until the rice is translucent around the edges, about 3 minutes.  Add the wine, stirring continually, and cook until fully absorbed, about 2 to 3 minutes.

Remove from heat and cover.  Allow the risotto to stand for 5 minutes.  To finish, stir in remaining 2 tablespoons of butter, parsley, chives and lemon juice.  If you want a looser consistency, add additional remaining broth/water mixture.  Season with salt and pepper and serve.
Posted by Gloria - The Ginger Snap Girl at 11:20 PM