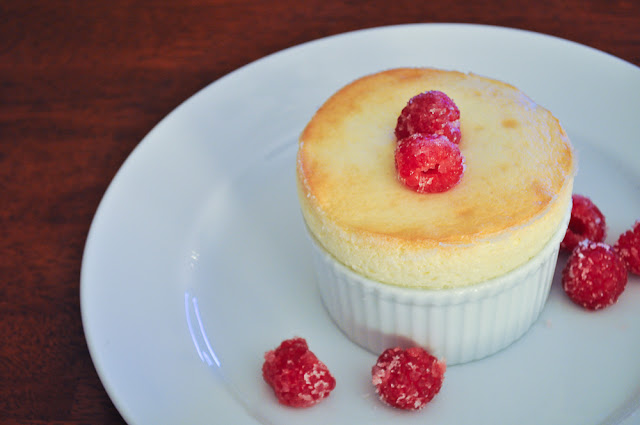 Hubby and I rung in the New Year in low key fashion.  We were both a bit under the weather.  Me with a cold.  Hubs with an ear infection.  We kept it simple and made dinner at home and rented The Dark Knight Rises on pay per view.  Dinner was nice.  He made homemade pasta (which I love because it doesn't weigh you down the way store bought dried pasta does).  I made an easy oven roasted tomato sauce to top it off.  I also pan seared some fish my dad caught on a recent deep sea fishing excursion.  I wish I knew the name of the fish...it actually had a greenish hue in it's raw form--apparently the best of the catch on Dad's trip.  It was a beautifully buttery flaky white fish when cooked.  Really delicious.  To cap it off, we decided the eve of 2013 deserved a special dessert.  Lemon soufflé.  Our very first homemade soufflé.

I have heard of the troubles soufflé can cause.  Apparently soufflés can be rather finicky with potential for a number of things to go wrong.  I'm happy to say we didn't encounter any issues.  We did take two out of the oven slightly early, but other than that, they turned out great!

The recipe comes from Baking & Pastry from the Culinary Institute of America.  Neither of us has attended the CIA, but Hubby picked up the book at our local restaurant supply store last year to learn more about bread making.  He's made several of the bread recipes.  The soufflé is the first non bread recipe we've tried from the book.   The book is written in textbook format and there are few pictures.  You will also have to break out your kitchen scale, because everything is by weight.  Many of the recipes are fairly large scale, but this one was manageable, filling 8 ramekins.

The soufflé starts with making a lemon infused pastry cream.  The cream is made in advance so it has time to cool.  We made our pastry cream before we started on the main course.  Once dinner was done, we moved on to part two of the soufflés.  The ramekins got a slather of butter all over the inside, all the way up to the rim and a dusting of sugar.  Egg whites were whipped to medium peaks and the pastry cream and egg whites get oh so gently folded together.  The delicate mixture carefully goes into the ramekins, onto a baking sheet and into the oven.  We crossed our fingers.  We weren't sure how long to cook them since our ramekins were smaller than the ones called for in the recipe.  So we sat on the kitchen floor with the oven light turned on and watched them like a hawk.  We really did sit on the floor.  One of cats joined us, wondering what the heck we were doing.  Turns out they cooked the same length of time as the original recipe called for.  And much to our surprise...the little buggers rose up a good inch past the top of the ramekin.  Success!

I topped mine with sugared raspberries.  It was delicious.  A soufflé is light, and airy.  The lemon flavor, subtle....nice.  If you could eat clouds, I would imagine it would be a lot like eating a soufflé.  These are so light, that you might feel like it's a good idea to eat 2.  I mean, if you have a bunch of left over soufflés, best to eat them to before they deflate, right?  Once they deflate they lose all the wonderful textural puffy lemony cloud custard qualities.

Though the recipe may look a little intimidating, the steps are straightforward and very manageable.  It's not as bad as it looks.  Promise.

On a photography note...these photos were taken around 8pm without any special lighting.  I set my camera up on the new tripod Santa brought me and allowed a long shutter release (I'm sure I'm not saying that right).  Then I used the white balance editing tool in Lightroom to take all the yellow lighting tints out of the picture.  Though these aren't as good as a natural lighting option, I was pretty amazed with the results.  Go Santa with the tri-pod.

Start by making lemon pastry cream.  This needs to cool completely before making the soufflé.

Combine 8 ounces of milk with lemon zest and 2.5 ounces of sugar in a saucepan and bring to a boil, stirring and pressing on lemon zest to release flavor.  Remove from heat, cover and allow lemon zest to steep in hot milk for 10 minutes.

While the lemon zest is steeping, Combine flour and remaining 2.5 ounces sugar in a medium bowl.  Whisk in remaining 8 ounces of milk, eggs and egg yolks until mixture is smooth.  Set aside.

Prepare an ice water bath in a bowl large enough to accommodate the bowl you will put finished pastry cream in.  Don't fill too full as you don't want any water to get into the pastry cream.

Remove lid from the milk/lemon mixture and return to heat and bring just to a boil.  Strain mixture into a bowl, pressing on lemon zest to release all the liquid.

Whisk in 1/3 of hot milk mixture into the egg mixture, whisking continuously.  Whisk in remaining hot milk, again, constantly whisking.  Return combined mixture back into the saucepan and bring to a boil over medium heat, whisking constantly.  The mixture will take several minutes to thicken.  But when it goes, it goes quickly.  You want to achieve a loose pudding consistency.  The mixture should coat the back of a wooden spoon and leave a trail when you run your finger through it.

Transfer the mixture to a clean bowl and place the bowl in the prepared ice water bath.  Cover pastry cream with plastic wrap pressed directly to surface of the cream.  Allow to cool for 30 minutes or so, then transfer to the refrigerator until ready to make soufflés.

Preheat oven to 350 F.  Coat the inside of the ramekins with soft butter.  Coat completely all the way up to the rim.  Dust ramekins with sugar and place on a baking sheet.

If pastry cream is chilled, use a hand mixer to bring to a smooth consistency.   Using a spatula stir in melted cooled butter and egg yolks until completely combined.

In the bowl of an electric mixer, fitted with the whisk attachment, whip egg whites on medium speed until soft peaks form.  Gradually sprinkle in sugar while continuing to whip.  Whip until medium peaks form.

Gently blend 1/3 of the egg whites into the pastry cream base.  Gently fold in remaining egg whites until thoroughly combined.

Portion soufflé mixture into ramekins gently spooning it in until it's a generous 3/4 full.  Space ramekins evenly on baking sheet and bake until soufflé is lightly golden and has risen 1 inch above the rim of the ramekin, about 20 minutes.

Sprinkle with powdered sugar (optional) and serve with fresh berries.