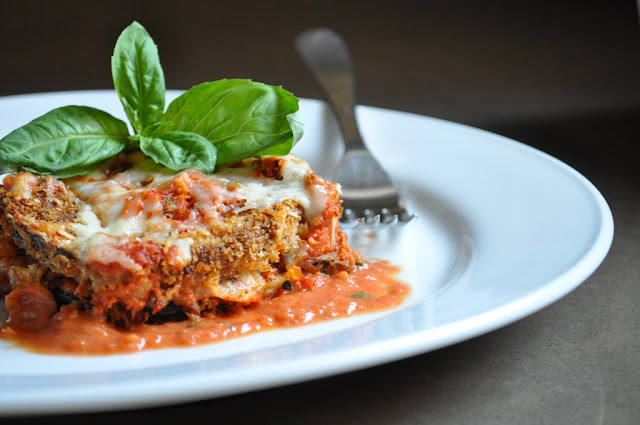 I have made some feeble attempts to cook with eggplant in the past.  This is my very first post with eggplant in it, which means my first successful eggplant dish.  Those folks over at Cook's Illustrated really know what they are doing.  They spend hours testing recipes up one side and down the other, figuring out the best way to get the most desirable outcome.  What I was missing from my previous eggplant attempts was salting the cut eggplant and allowing it to sit to remove excess liquid (apparently a basic step in preparing eggplant that I was not aware of).  This recipe also has a wonderful method for getting a nice crisp bread eggplant round without frying. 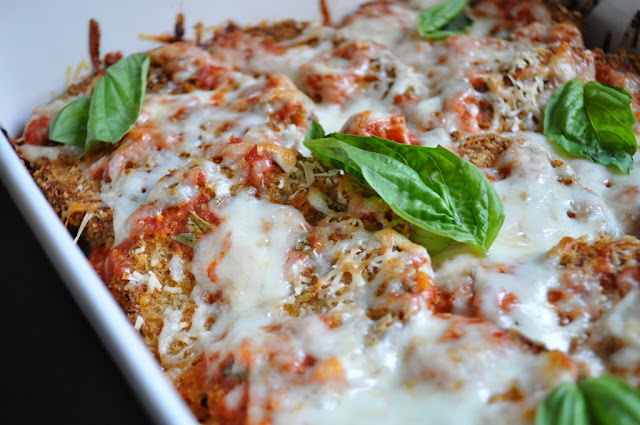 This recipe is no 30 minute meal so allow plenty of time to prepare it.  I made it on a leisurely Sunday afternoon so I wouldn't feel rushed.

The recipe starts by cutting the eggplant into 1/4 inch rounds and coating them generously with salt.  They go into a colander over a bowl and sit to allow liquid to drain.  This process takes up to 45 minutes.  I used this time to make the sauce (the recipe recommends making the sauce while the eggplant bakes).  Once the eggplant releases about 2 tablespoons of liquid they get transferred to a triple layer of paper towels to further remove excess liquid.  Then the eggplant gets dredged in flour, egg and a breadcrumb mixture.  Instead of frying the eggplant to get a nice crispy coating, they go onto a baking sheet preheated to 425 degrees and lightly coated with olive oil.  The rounds go into the oven and with a little rotating and flipping, come out beautifully browned and crisp. 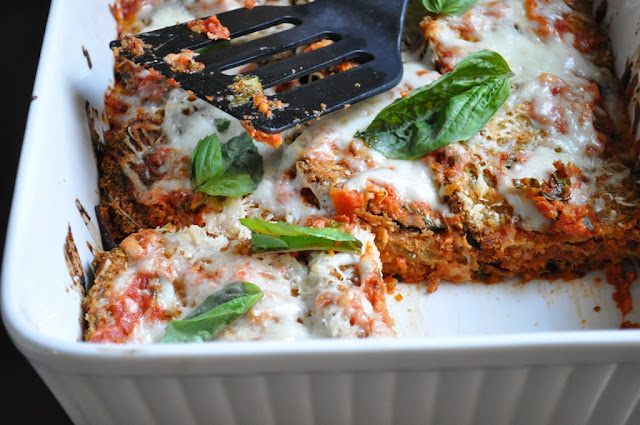 I did a little tweaking with the sauce...I followed the directions as noted below but found it to be a bit acidic.  I added a bit of sugar and a bit of heavy cream to reduce the acid.  I also found the red pepper flakes to be too much heat for my taste and would cut the amount in half next time.  Though the sauce was tasty, I will play around with it a little more next time I make this.

The last step is to layer the crispy eggplant rounds with sauce and mozzarella cheese in a baking dish and go back into the oven to melt the cheese.

The result?  Hubby and I both loved it.  It's warm.  It's hearty.  And most importantly, it's delicious!  Eggplant has a very mild flavor that pairs perfectly with marinara sauce and melted cheese.  If you have not tried eggplant, I urge you to give it shot.  It's good stuff! 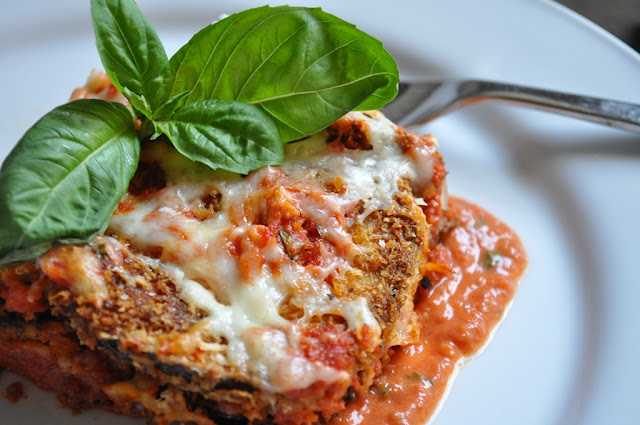 Another approach would be to plate the crispy eggplant in individual servings, top with sauce and cheese and put it under the broiler for a few minutes until the cheese turns golden brown.

This will be repeat dish in our house. And now that I know Hubs likes eggplant, a whole new avenue of recipes has opened up!

Make the eggplant:
1.  Toss half of the cut eggplant rounds in a large bowl with 1 1/2 teaspoons of kosher salt.  Transfer the salt eggplant to a colander that is set over a a bowl.  Repeat with the remaining eggplant and salt.  Let the eggplant stand in the colander for 30 to 45 minutes or until the eggplant releases about 2 tablespoons of liquid.  Place the eggplant rounds on a triple layer of paper
towels.  Place another triple layer of paper towels over the eggplant and firmly press each slice to remove as much liquid as possible.  Wipe off excess salt.
2.  About 20 - 30 minutes into the eggplant draining adjust your oven racks placing one in the upper third and one in the lower third of the oven.  Place 1 large rimmed baking sheet on each rack and then heat oven to 425 degrees F.
3.  In pie plate or large shallow dish, combine breadcrumbs, Parmesan cheese and salt and pepper to taste.
4. Set aside a large baking sheet and place a wire rack over the top.  Combine the flour and 1 teaspoon black pepper in a large zip top bag and shake to combine.  In a second pie plate or large shallow dish, beat egg.  Place 8 to 10 eggplant rounds in the bag and and shake to coat.  Dredge each round in the eggs, evenly coating both sides.  Then coat the round in the breadcrumb mixture, evenly coating both sides.  Place each coated eggplant round on the wire rack and repeat with remaining rounds until they are all breaded.
5. Remove one of the preheated baking sheets from the oven and add three tablespoons of olive oil to the sheet, tilting to evenly coat the sheet with oil.  Place half of the breaded eggplant rounds onto the sheet in a single layer and set aside.  Repeat process with the second baking sheet and remaining eggplant rounds.  Return both sheets to the oven.  Bake until the eggplant is browned and crisp about 30 minutes, switching and rotating the baking sheets after 10 minutes and flipping the eggplant slices with a spatula after 20 minutes.  Do not turn oven off.

Make the sauce (I made my sauce while my eggplant was draining):
1. While the eggplant bakes, puree 2 cans of diced tomatoes in a food processor or blender until almost smooth.  If you are using pureed or crushed tomatoes, skip this step.
2.  Heat olive oil, garlic and red pepper flakes in a large heavy-bottomed saucepan over medium-high heat, stirring periodically until garlic is lightly browned (about 3 minutes).  Stir in processed tomatoes and bring sauce to a boil.  Reduce heat to medium-low and simmer until reduced and slightly thickened, about 15 minutes.  Stir in the basil and season with salt and pepper to taste.

Assemble:
1. Spread 1 cup of tomato sauce in the bottom of a 13x9 inch baking dish.  Layer in half of the eggplant slices, overlapping to fit.  Spread 1 cup of sauce over the eggplant and sprinkle half the mozzarella on top.  Layer the remaining eggplant and dot with 1 cup of sauce, leaving much of it exposed so it will remain crisp.  Sprinkle with remaining mozzarella cheese and Parmesan cheese.
2. Bake until bubbling and cheese is lightly browned, about 13 to 15 minutes.  Cool for 10 minutes and scatter basil leaves over the top.
Posted by Gloria - The Ginger Snap Girl at 5:30 PM