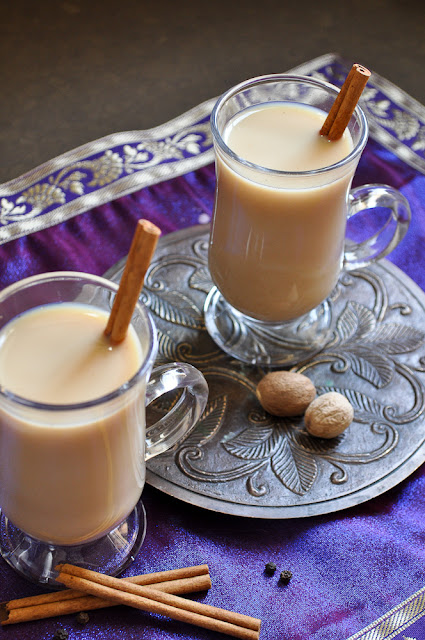 I'm loving the flavors of fall.  I can't seem to get enough pumpkin and apple at the moment.  I just had the best dessert tonight (ya, ya, I know I'm supposed to be dieting....I will gladly save calories for this anytime!).  What was so yummy?  Hubs and I went to Yogurtland and they had pumpkin pie and cinnamon graham cracker frozen yogurt flavors.  Together these two are absolutely heavenly.  A Yogurtland first for us...Hubby and I actually got the same flavors of yogurt.  This has never ever happened before.  Our tastes are typically on opposite sides of the dessert spectrum.  But I guess pumpkin is our meet in the middle treat.

Now I'm in the mood for a real pumpkin pie with perhaps a cinnamon graham cracker crust?  I'll have to work on that.

In the meantime, this chai tea is satisfying my fall cravings.

It's Secret Recipe Club time!  For those of you haven't heard about Secret Recipe Club, it's a great group of bloggers who get assigned another person's blog each month and it's a "secret".  You stalk the person's blog you were assigned in search of recipe to make and post about.  All the participants "reveal" their secret blog on the same day and time.  It's a lot of fun and is a great way to get know new blogs and find some pretty amazing recipes.  If you're interested in joining, check out the SRC site.

This month I was assigned Aimee's blog, from Chapel Hill to Chickenville.  Aimee's a wife and busy mom to four little ones.  She graduated college from University of North Carolina at Chapel Hill and after a few years in the hotel business and sojourn to Australia, she met her hubby and settled down in what she likes to call Chickenville.  She really does have a brood of hens in Chickenville!  Which is pretty cool.  When Aimee's not homeschooling or tending to chickens she loves to make magic in her kitchen.  Her blog is filled with a variety of delicious looking recipes and it was difficult to choose just one.  I had my sites on a scrumptious pecan pie, a light, airy pavlova and spiced pumpkin soup.

Sticking with the fall flavors I finally decided on chai tea.  Chai tea lattes are one of the few drinks I order on the rare occasions I end up at a Starbucks.  And I love it.  Chai is all about the spices.  The spices seem to vary by recipe, but common flavors you will see are cinnamon, cloves, ginger, cardamom and peppercorns.  Mix in a little tea, sugar and milk and you have a hot spiced drink that gives you a big warm hug when you sip it.  I made a feeble attempt at making chai tea at home once a while back.  I bought chai tea bags and followed the directions on the package, which includes adding milk.  The final product was really not even drinkable.   So when I saw a chai recipe on Aimee's blog I knew I wanted to give this spiced beverage another shot.

Thankfully this go round was a huge success!

It's creamy, it's sweet and perfectly spiced.  The recipe is a chai concentrate that you store in the fridge and then add milk and heat when you want to enjoy a cup.  I halved the recipe below (since Hubby won't help me drink it)...and made a few modifications.  I added in a vanilla bean.  This could easily be omitted.  Aimee's recipe called for star anise and instead I added a new ingredient which I just ordered online, called pumpkin powder.  The pumpkin flavor is very mild and very much in the background.  You could easily omit this as well or add in any of your own favorite spices.  The last change I made was to use ground cardamom instead of cardamom pods since that's what I had on hand.  I was very happy with the final spice blend.

The coolest part about Aimee's recipe is she also makes this to give as gifts.  Simply package up all the dry ingredients in a mason jar, write up instructions on how to make the tea and finish by dressing it up with a little fabric or ribbon (head to Chickenville for Aimee's packaging tips).  Such a great idea!  Thanks Aimee.

Split vanilla bean down the middle with a sharp knife and scrape out seeds.  Combine all ingredients (including vanilla bean pod and seeds) up through 6 cups of water in a saucepan and bring to a boil,, stirring occasionally.  Turn heat to low and add the tea bags.  Steep tea bags for 10-15 minutes.  Remove the tea bags and add sugar, stirring until dissolved, about 2-3 minutes.  Add remaining two cups of water and stir.  Pour chai concentrate through a fine mesh sieve and discard spice residue and store in an airtight container in the refrigerator.  Note you can save the vanilla bean for use in vanilla sugar.

To make tea, add the concentrate to your cup or mug, filling until halfway full.  Fill remainder of the cup with milk and microwave until hot.  Or place a 50/50 mixture of milk and chai concentrate in a small saucepan and heat on stove.

Note: To make chai mix as a gift head over to Aimee's blog and get her tips to package this up for giving.  Note, if you want to use a vanilla bean in a chai mix gift, just split the bean down the middle and nestle it into the sugar, fully covered.  The vanilla flavor will permeate the sugar.

Posted by Gloria - The Ginger Snap Girl at 9:00 AM