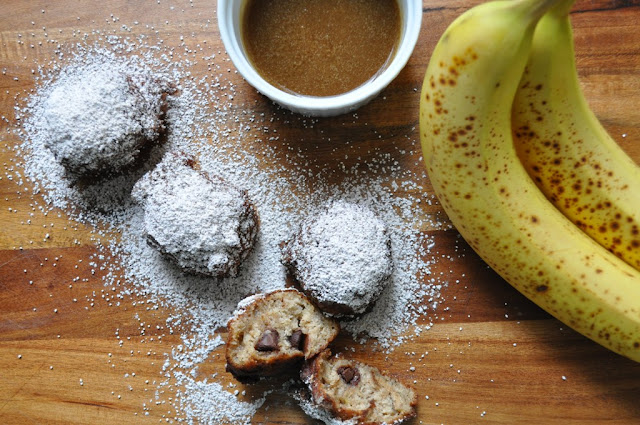 The first time I remember having bananas foster was early on in my dating life with Hubby.  We went to a dinner party hosted by one of my co-workers at the time and they made it for dessert served over ice cream. As I watched my co-worker's husband make the dish, I was wowed by the drama of it.  The rum caught on fire lighting up the pan while the bananas flambeed amdist a gooey caramel like rum sauce.  What I was most impressed with was the simple ingredients involved and how quickly a delicious and impressive dessert came together.

Baked Explorations Banana's Foster Fritters are inspired by the classic dish.  It's bananas foster meets donut.  I was worried this would be a lot more complicated than its inspiration dish.  But it really wasn't.  The dough is very simple and comes together quickly and easily.  The rum dipping sauce takes just a few minutes in a saucepan.  The most challenging part was the frying.  I still struggle with frying and getting oil to the right temperature.  The recipe recommends 375 degrees, but I found that too hot.  My first fritter was very dark on the outside but still raw on the inside.  I lowered the heat and found 350-360 worked best for me, however, the outside was still a tad darker than I would have liked it to be.  But at least the dough wasn't raw!  As you can see I gave these a solid dusting of  cinnamon powdered sugar. 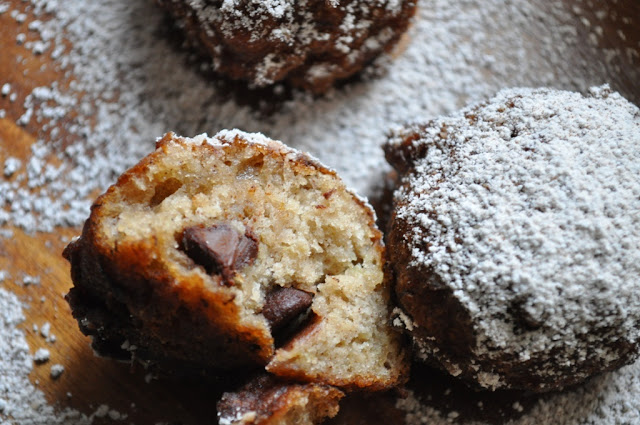 The result?  A crisp texture on the outside with a moist cakey inside.  The bananas are incorporated into the dough and the dipping sauce is what makes this a "fosters" fritter instead of just a banana fritter.  With brown sugar, butter and a little rum, among other things, the sauce has the same flavor as the gooey goodness from a traditional banana's foster.  Seems like the sauce was a big hit with many of the Club: Baked bakers.  Some have even suggested this would be a good sauce/syrup for pancakes, waffles or french toast or a topping for ice cream.  All great ideas!

Oh, I almost forgot to tell you the best part!  You probably already noticed in the pictures, I added chocolate chips into the dough of a few of the fritters.  I love banana and chocolate together.  It was delicious! 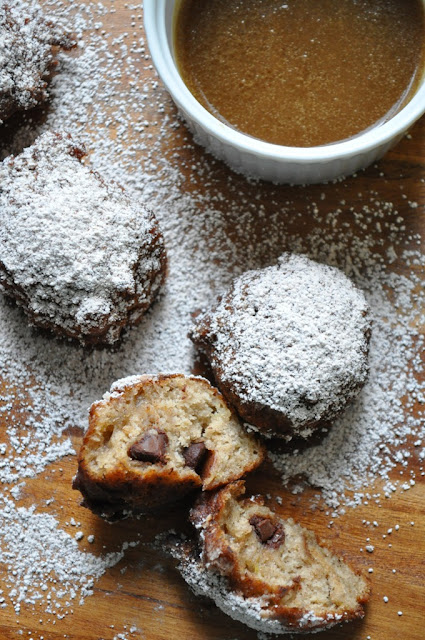 Hubby enjoyed these (the ones without chocolate chips of course), which is always a pleasant surprise coming from my non dessert loving husband.  I made half a batch and ended up with 8 small fritters.

Thank you to Stephanie of Ice Cream Before Dinner for choosing this week's tasty recipe.  You can find the recipe over on her site.  To see how other bakers did with their fritters head over the Club: Baked site.

Next up on the Club: Baked roster...Pumpkin Cheddar Muffins on October 1st.  I'm not gonna lie, this one sounds a little odd to me.  I have had mixed feelings about savory muffins in the past.  But I'm curious about the combination of pumpkin and cheddar.  This one is definitely outside my comfort zone--which isn't a bad thing!
Posted by Gloria - The Ginger Snap Girl at 5:28 PM