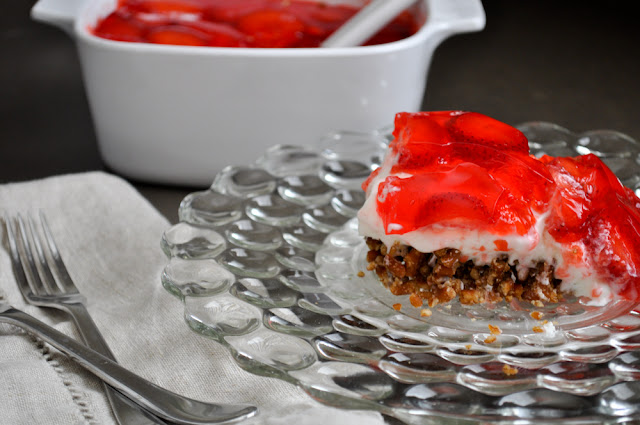 I started a walk/run routine first thing in the morning.  And when I say routine, I mean I've done it 4 times in the last 5 days.  Don't get me wrong, it's a good start.  But in reality, I don't trust myself.  I need to check back in a couple of weeks to determine if it really has the potential to be a routine.  I'm doing a 3 mile circuit and I walk some and run some.  My goal is to run the full route at some point.   I think it's necessary that this become a regular part of my day.  Mostly so I can eat more of this Strawberry Jell-O Salad and the array of other desserts my sweet tooth craves. 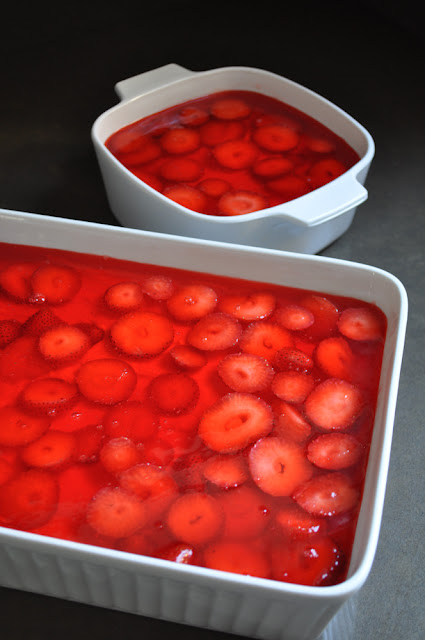 I've had my eye on this recipe ever since I bought Baked Explorations about a year and a half ago.  It was an easy pick when I was asked what recipe I wanted to host for this round of Club:Baked.  I can't say exactly why it originally caught my eye.  Probably because Jell-O brings me back to childhood.  My family never made a dessert quite like this when I was a child, but I can say my family surely enjoyed it when I brought it for a gathering this past weekend. 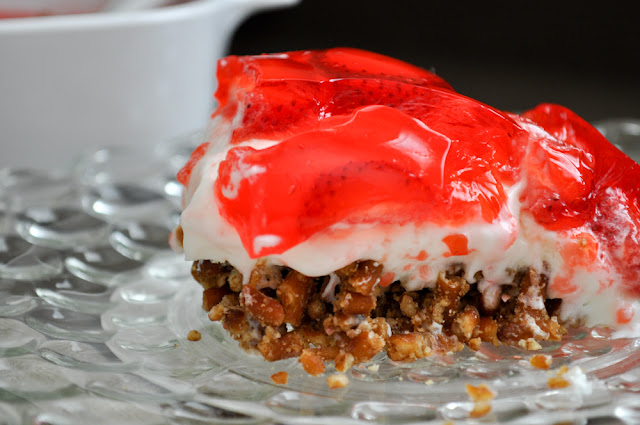 I'm not exactly certain why it's called a salad...but call it what you want, it's damn tasty.  This dessert "salad" is layered in a 9x13 pan.  The bottom is a salty and slightly sweet crunchy pretzel crust.  The middle layer is smooth cream cheese filling that is lightened up by folding in fresh whipped cream.  The top is good old strawberry Jell-O from a box studded with fresh sliced strawberries.  Bring it all together in one bite and I'm a happy girl.

Each component of this recipe is easy to make.  It does require some planning ahead and a little bit of patience to allow the Jell-O to set up properly.  When I took my photos, I think my salad could have used a little more fridge time as it wasn't long until the Jell-O layer started to slowly slide off the cream cheese layer which resulted in far fewer photos than I would normally take.

I doubled the recipe...sort of.  I wanted to take a full recipe to my family gathering on Sunday, but I didn't think setting up a photo shoot at the event would be the best approach.  And it's not so classy to bring over a dessert that's already been cut into.  So I made a small version just for me!  Problem is I misread the amount of Jell-O thinking it called for a 3 ounce box, when it actually called for a 6 ounce box.  After I was already well into the recipe, I realized that I had double of everything except Jell-O.  Despite the miscalculation, it still worked out just fine.  I had slightly thicker pretzel and cream cheese layers than pictured in the Baked book, but in the end it all tasted delicious.

To see how other Club: Bakers "salads" turned out head over the Club: Baked site.  Enjoy!

To make the Jell-O layer
Prepare the Jello-O according to the instructions on the package.  Stir in sliced strawberries and refrigerate until it is partially set (about 45 minutes to 1 hour depending on the size of the container you use--I used an extra large, shallow bowl and it took 1 hour to partially set).  While you wait for the Jell-O, make the other components of the recipe.

To Make the Pretzel Crust
Preheat oven to 325 degrees F.  Prepare a 9x13 pan by buttering the sides and bottom or spray with non stick cooking spray.

In a medium saucepan melt the butter over low heat.  Whisk in the brown sugar and remove the pan from the heat.  Stir in the pretzel pieces until well combined.  Pour pretzel mixture into your prepared pan and gently press it evenly across the bottom of the pan.  You can use your hand or a flat metal measuring cup to press the crumbs into a crust.  Don't press crust up the sides of the pan.  Bake for 10 minutes and set aside to cool.

To Make the Cream Cheese Layer
Place the cream cheese and sugar in a bowl of stand mixer, or use a regular bowl and hand mixer (this is what I did) and beat on medium speed until fully combined (about 2 minutes).  In a clean bowl whip heavy cream on medium high speed with your stand mixer fitted with the whisk attachment (or you can whip it by hand with a whisk) until soft peaks form.  Using a rubber spatula, gently fold in the whipped cream in batches into the cream cheese mixture until fully combined.

Assemble
Spread the cream cheese over the fully cooled crust.  Chill for 5 minutes in the refrigerator.  Pour the Jell-O over the cream cheese filling and cover and chill for 2 more hours or more before serving.

Store tightly covered and refrigerate for up to 3 days.
Posted by Gloria - The Ginger Snap Girl at 5:00 AM