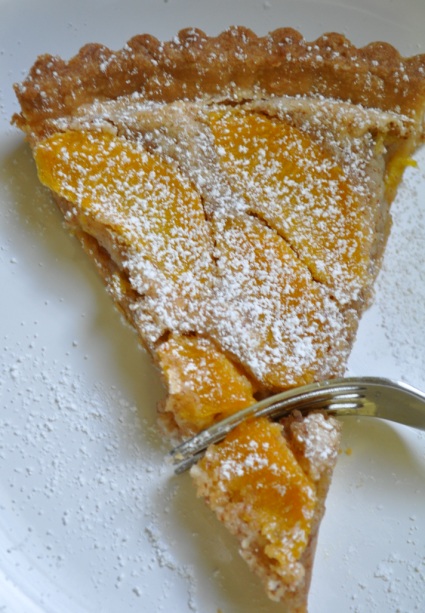 I have been making a pretty poor attempt to keep up with the weekly cooking and baking for the online group, French Fridays with Dorie.  The goal is to cook and bake our way through Dorie Greenspan's cookbook, Around My French Table.  Though with more than 300 recipes (according to the tag line on Amazon.com) in the book, making 52 recipes a year, we'll be done sometime in 2016!  Good grief.   I have never done the math on that before.  Anyway, if you are interested in joining the fun click here.  That probably wasn't my best effort to convince you to join our group!  The nice thing about this group is there are no frequency of participation requirements.  So cook and bake along as it suits you.  Ok, that's a little better.

The group made Dorie's Orange Almond Tart on February 11th.  So I'm only a couple of weeks behind.  I'm clearly engaging the bake along as it suits you concept.  This recipe was a stand out and I knew I wanted to make it, even if it's a little bit late.  I love oranges and have had a constant supply of them in the fridge for the last month and half.  I've never a seen a recipe with baked oranges, so this was definitely intriguing.  This is also my first time making a tart so I had to go out and purchase a tart pan.

This recipe has been described many of the FFwD folks as "fussy".  And it is.  This isn't something you can just throw together.  It's best made over the course of 2 days.  You can do all the prep on day 1 and then assemble and bake on day 2.

The preparation starts with making a sweet tart dough.  The dough is made in a food processor and then can either be pressed into a buttered tart pan or it can be chilled then rolled out and laid into the pan.  I opted for the press in method. 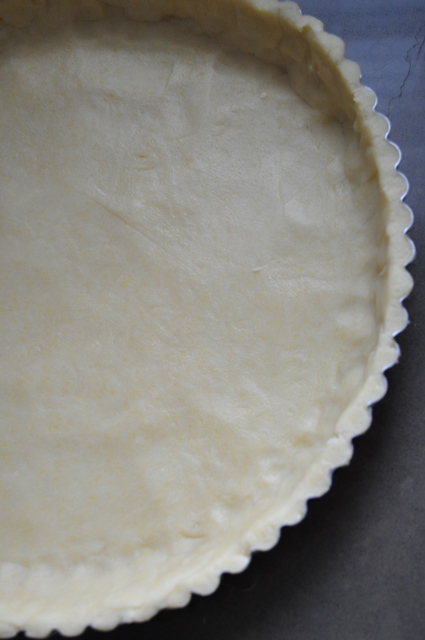 I don't think I got the same thickness all around, but it still worked out ok.  Once the dough is pressed in, you prick the bottom all over with a fork and then freeze it for at least 30 minutes.  It bakes for about 25 minutes until the crust is lightly golden. 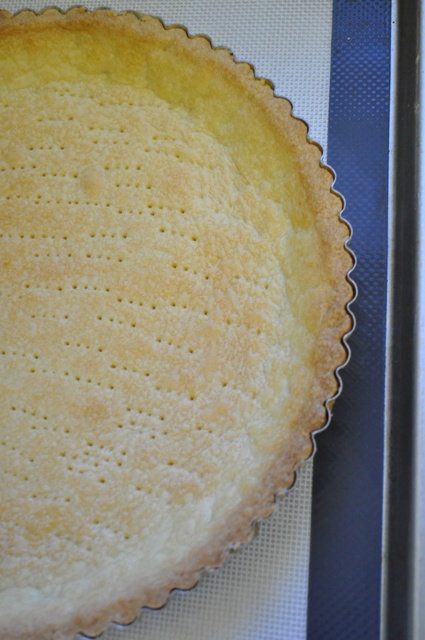 The second step in preparation is cutting and segmenting the oranges.  This also has to be done in advance because the oranges need to dry out on paper towels for an hour or more, or Dorie even suggests overnight.  I went for overnight. 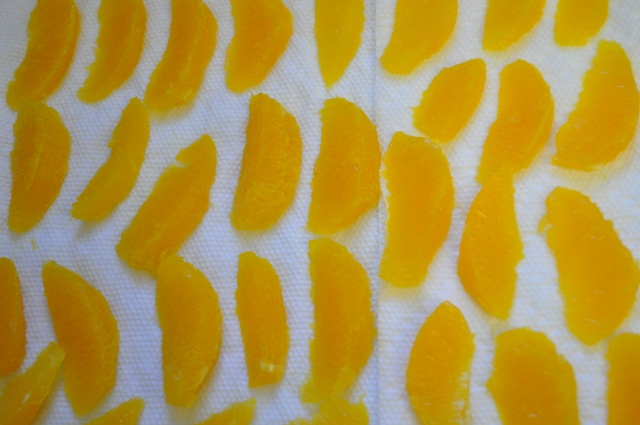 The third step is preparing the almond cream.  This part of the recipe also comes together in a food processor.  The almond cream really isn't technically a cream, however, has a creamy texture.  It's a mix of almond flour, butter, sugar, vanilla and egg.

The fourth step is assembly.  The cream goes in the tart shell. 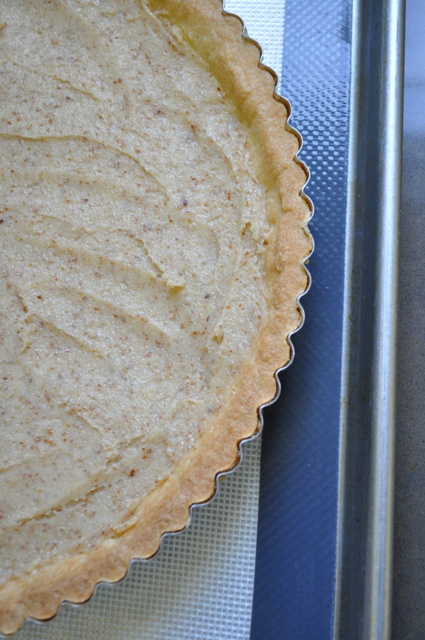 The orange segments get distributed in a design of your choosing on the top. 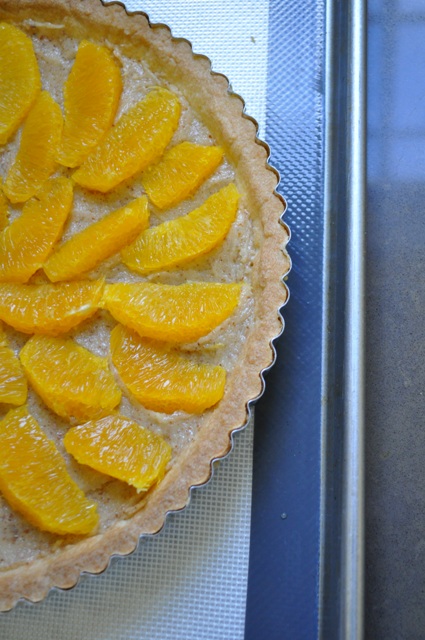 Finally, you are ready to bake! 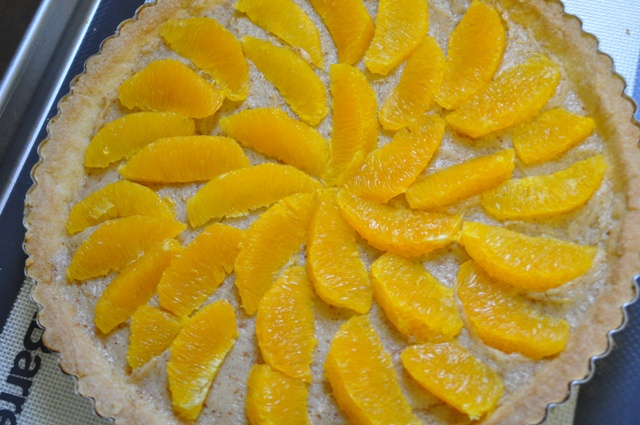 60 minutes in the oven or until the almond cream puffs up around the oranges and turns lightly golden brown.  Mine took the full 60 minutes. 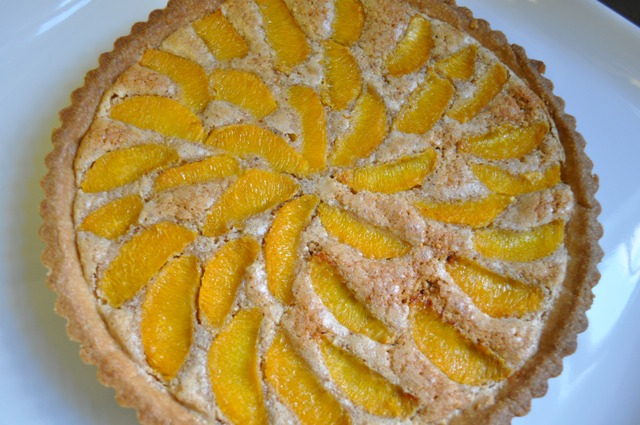 So?  How did it turn out?  To be honest, it was a little weird.  The almond cream is amazing.  It's almondy and creamy and has a rich brown sugary taste (even though there is no brown sugar).  It almost reminded me a little of pecan pie filling.  The tart dough was thick and on the "tough" side.  I think I overworked the dough (Dorie warns against this).  But the taste of the tart dough is nice, just slightly sweet and shortbread like.  The oranges were the "weird" part.  When baked they had a slight bitter flavor.  They were hard to cut through and were almost chewy.  Dorie also suggests trying this tart with other fruit, such as pears or plums.  Both would be a wonderful compliment to the oh so delicious almond cream.

Good enough to make again?  Yes!  With variations and hopefully a little more finesse on my tart dough.

For the recipe check out Dorie's book, Around My French Table.
Posted by Gloria - The Ginger Snap Girl at 7:30 AM